Copycats are a fact of life in the business world. No one likes someone suckling at their creative teat (ick… bad metaphor), but instead of getting mad, get over it and get AWESOME. 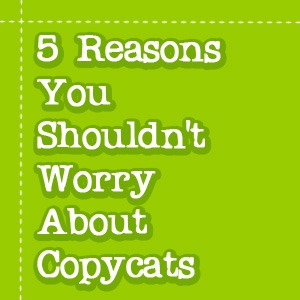 1. You aren’t the only creative person on the planet.

The farting unicorn t-shirt I designed for my band is a perfect example.

I originally thought of the idea of a unicorn farting a rainbow several years ago. And I swear that when I searched it then, there was nothing. I was actually surprised. Surely I wasn’t the only person to come to the conclusion that a unicorn would most definitely fart a rainbow?!?

But not really. I didn’t actually get around to posting the shirt design until last year. When I googled farting unicorn then, lo and behold, I saw what you see now. MY IDEA, everywhere.

The point being: was it my original idea? Yes. But was I the ONLY person to have the idea? Clearly not. Did someone have the idea before me, even though when I looked for it, I didn’t find it? Probably.

Furthermore, all of the farting unicorn designs out there are quite a bit different from one another, so while the basic premise might be the same, and some may have even been inspired by others, they’re still not copies. The same way that drawing a rabbit eating a carrot isn’t copying Bugs Bunny.

It’s merely a similar idea, done differently. And that’s allowed. How boring would the world be if it wasn’t?

2. Everything has been done before.

You know that awesome, original, totally creative idea you had? Someone’s probably already done it before. This applies to my farting unicorn above in the “idea” sense. And it applies to a lot of other things like clothing, bags, etc. in the literal sense.

I didn’t invent the circle skirt. It’s been around forever. So I didn’t even have the original IDEA for a circle skirt. I’d seen them a million times before, and literally said, “Hey! Circle skirt! I’m gonna make one of those.” 100% someone else’s idea. Whose idea? Probably no one knows.

That may seem fairly obvious, but let’s take it a step further. Let’s say it was a circle skirt… with a poodle applique sewn on. I know you’ve seen those. They’ve also been around forever. So am I a copycat for making one? I don’t think so.

Let’s go less obvious. What if I made a zebra print circle skirt, but instead of the common theme of a poodle,  I go with a skull. And then I see someone else doing the same thing. Copying? In my opinion, it’d be awfully presumptuous to assume that I was the only. person. ever. that thought of combining the two, even though it’s not the traditional poodle skirt.

Okay, sure, there are legitimate copycats out there, ripping off every little detail that made your design YOURS, and you know very well that they got the idea from you. Because it’s your EX-best-friend, or your arch nemesis who’s trying to destroy you, or your evil robot twin.

I’ve been there, but I’ve gotten to the point that I just don’t care anymore. I might get a quick pang of annoyance, and then I move on with my life. These are the reasons I was able to do that:

Unless someone copies your actual artwork or words or makes a mold of your sculpture (and in those cases, get medieval on their asses, by all means*), there’s not even anything you can do about a copycat.  Someone could go look at my shop and replicate all of my designs and I couldn’t do squat, aside from get pissed and tell everyone how sucky they are.

At the risk of sounding like a hippie, I’m all about the PMA- Positive Mental Attitude. I know, unicorns, rainbows, and now happy thoughts? But it’s true: thinking positive generates positive energy. If you focus on all of the good things in your life, how can you NOT feel awesome? The exact opposite is true of negative energy. Worry, anger, bitterness… all those feelings result in misery, so why dwell on them?

But you can’t help how you feel, right?

You can help what you DO with your feelings. Take that GRRRRRR you’re feeling about that copycat and go make something really kickass. Or bake someone special some cookies. Or pet your cute snuggly kitty cat. Instead of wallowing in and/or spreading the negativity, do something positive. Just imagine how goddamned magnificent the world would be if we all did something positive when we wanted to do something negative.

I’ve been there, and I’ve done the negative thing, and now that I have more perspective, I wish I could take it back. It did zero good. What a waste of my energy! I could have made cupcakes instead! Unless you’re immortal, you’ve got better things to do with your time than to let a copycat mess up your game.

*If someone is using your photographs, text, or artwork without your permission, they are committing actual copyright infringement.  In such cases, I’d suggest sending them an email politely explaining that you are the owner of the work, that using it without your permission constitutes copyright infringement, and that you are asking that they remove it to avoid legal action. Most people will oblige with an apology, because they simply didn’t know that what they were doing was wrong. It’s a sad side effect of information being so readily available on the internet that many people just assume they can take anything they find on the internet and use it.

They’ll make quick buck off your idea and then move on to someone else’s idea. And then they’ll die. Figuratively, of course.

Every single instance where I felt I was copied- the shops were either gone within a year or the person stopped replicating my design very quickly.  You know why?

Creative people are driven by the creative process. They would get bored very quickly with copying.

Copycats are driven by money. And sooner or later most of them will realize what all of us handmakers already know- if you’re in this for the money, you’re going to be sorely disappointed.

5. Publicly talking about people copying you makes you look petty.

And unprofessional. And full of yourself.

It didn’t occur to me until later, when I heard other people complaining about this or that person that copied them that I realized it. Even at times when I thought, “Yeah, that really does look like someone copied you,” the overall feeling I had was negative.

Is negativity what you want associated with your brand? Because mine sure as hell isn’t. So even if people are agreeing with you, “YEAH! THAT BITCH TOTALLY COPIED, LET’S GO GET PITCHFORKS AND TORCHES AND STAND OUTSIDE OF HER HOUSE!” … they might subconsciously be thinking, “Doesn’t this person have better things to do than whine about copycats?”

And they’re right, because you could be making super sweet shit instead! So go do it and stop worrying about copycats.

For more perspective on copycats, check out: http://pikaland.com/2010/06/01/copycats-lessons-we-can-learn

20 thoughts on “5 Reasons You Shouldn’t Worry About Copycats”