Handmade businesses are like sharks. We have to keep swimming, or we die. Swimming in our case is promoting. 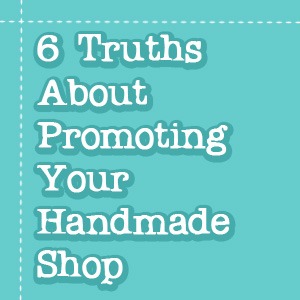 And believe me, I know you hate it. We all hate it. But at the risk of sounding like Captain Obvious:  if no one knows your business is out there, they can’t buy your product.

This is true in a very literal sense- imagine you crocheted a hat to sell. Once you finished making the hat, you stuck it in a shoebox and stuffed it in your closet and never told anyone about it. It would be ridiculous to think anyone would buy it. They don’t even know it exists.

Well then, let’s say you work up the courage to do this for real. So you set the hat out on your coffee table with a price tag. (Hey, everyone has to start somewhere.) Now maybe you get lucky and a friend or family member wants to buy it. What’s more likely is they’ll wonder if you’ve gone a little cuckoo-bananas.  (Jerks!)

Okay, so you’ll take it one step further and set up a little table on the front lawn. Maybe you’ll get a bullhorn so you can yell at cars passing by. Perhaps you’ll make a nice sign: Captain Obvious Crochet Hats! $25 each!

Now we’re getting somewhere. Instead of reaching the 2 or 3 people that might see the hat sitting on your coffee table, you’re potentially reaching all of your neighbors and everyone that drives past. Twenty people? Two hundred? It depends on a lot of things, but it’s way more than just inside your house.

While the above example is a bit silly, it captures the essence of promoting ANY business, not just handmade. Too many people open an Etsy shop or an online store, and expect that the sales will just happen on their own.

There are hundreds of thousands of Etsy shops. Millions of online shops. Billions of other pages on the internet. Even with targeted searches, the idea that customers will just waltz into your online shop is not so different from putting the hat on your coffee table and expecting the customers to come knocking on your door.

So now that I’ve convinced you of the absolute necessity of promotion, here are some hard truths.

1. You will never be done promoting. Take it from the pros: there’s a reason that household names like Coke and McDonalds promote non-stop, even when everyone knows they’re there.

Let’s go back to our hat example. You’re sitting at your little hat stand by the road. You haven’t quite worked up to the fancy sign yet, but you do have your bullhorn. You push the button and say, “Captain Obvious Hats for sale! Just $25 a piece!” And then you sit down and wait. And wait. And wait. And you don’t sell a single stinkin’ hat.

Conclusion: promotion is stupid and pointless and doesn’t work.

Everyone yell at the hat lady: “You only used the bullhorn once! You got the first car, but missed the next 50 cars that drove by!”

Obviously the answer is not to promote every single second. Once you hit a certain point, people get annoyed or tune you out. But too many people throw up their hands and give up when they don’t see immediate results. Which leads us to our second truth.

2. The benefits of promotion can be delayed. If you expect immediate results, you’re setting yourself up for disappointment and failure.

If you’d asked me about promoting in my first two or three years of selling, I probably would have shrugged and made a caveman-esque grunt. I did what a lot of sellers did: I bombed about a dozen of the most relevant and popular LiveJournal fashion communities when I listed new items or had a sale. That amounted to about 2-4 times a month. And I posted a lot on Craftster.

If you’d asked me if that worked, you could have expected another grunt.

It wasn’t much. But I’m still reaping the benefits from those early efforts. I can’t tell you how many times someone has said, “I’m so excited to buy this dress, I’ve been following you for years on Craftster.” If I’d never connected with that person, however I did, I simply wouldn’t have made that sale.

Just think about yourself as a customer. If you see a commercial for a new pizza place in town, there are a lot of reasons you might not run out and buy a pizza from them right this second: You just ate. You’re on a diet. It’s 4 AM, they’re closed! You’re just not in the mood for pizza. But the next time you buy pizza, it just might be from them. Their promotion worked, they just had to be patient.

That’s why it’s so important to keep promoting. You’re creating a potential future sale every time you reach a new person.

3. Promoting doesn’t always work the way you think it will.

A few years ago, I started to notice my promotion was paying off a little more quickly. I could always count on at least one sale when I was actively promoting my new items.

But something surprised me: the items I sold were often not the items I was promoting. I almost made the mistake of thinking my promoting wasn’t working because the new stuff wasn’t selling right away. But luckily I recognized that a rising tide lifts all boats. When I promote one item, it potentially benefits every item in my shop.

Sometimes this aspect can almost be disappointing. You’re no doubt excited about the new things you’ve created, you can’t wait to unleash them on the world, and then it seems like no one cares. But remember Truth #2, and also remember that a sale is  sale. Don’t look a gift horse in the mouth. (It’s ungracious, and also the horse doesn’t like you looking in his mouth like that.)

4. Social networking sites can be valuable promotion tools, but dicking around on Facebook and Twitter does not count as promoting.

Tweeting about your cats (guilty!) is fun. I think we can all agree that promoting is generally not fun, so don’t pretend that the fun stuff in between counts.

I spend a lot of time (probably too much) on Facebook and Twitter and Pinterest and AttackofTheCraft. And let’s get real: most of that is not spent promoting. If it takes you 1 minute to write a post about your new items, you’re not fooling anyone into thinking that the additional hour you spent there was actual promotion. I’m not saying you can’t have that happy-fun-time, but I am saying you can’t count it as promotional time.

Promoting is a chore, so treat it like one. When your toilet needs to be cleaned, do you whine about how much you hate cleaning it? (Well, I don’t! Truthfully, I don’t mind cleaning the toilet for some reason. You can draw your own conclusions from that.) If you do, then I’m here to say, “SHUT UP. STOP WHINING. CLEAN THE TOILET- I mean- PROMOTE YOUR SHOP!”

Set aside 30 minutes a day for promotion. ACTUAL PROMOTION. Cat updates do not count. If you need to break the thirty minutes into three 10 minute chunks, do it. Find what works for your and do it.

5. If you hate promoting that much, you can pay someone to do it for you.

You can buy advertising on websites and in magazines. Hell, you can run tv commercials locally for pretty cheap. You can pay someone to manage your Twitter account.

If you do spend money to promote, spend it intelligently. Choose websites and magazines that fit your target audience. It wouldn’t really make sense for me to advertise in Cat Fancy, no matter how much I love cats. It would make a lot more sense to advertise in Inked or Bust or Gothic Beauty.

Likewise, you can buy fake Twitter followers and Likes for your Facebook page. The idea being that if your business appears to be popular, it’s more appealing to real people. Questionable, if you ask me. Unless you’re going to start accepting Monopoly money as payment, I don’t see this as a viable option for most businesses. It would be much more useful to use your money to target a specific demographic of REAL followers who are REAL people with REAL money.

6. If you aren’t willing to promote, and you can’t/won’t pay to promote,  then business isn’t for you. And it’s not just handmade business, it’s any business.

The obvious statement I made at the beginning of this article is probably most accurate and easier to understand if you reword it: If that person doesn’t know your business is out there, then that person can’t buy your product.

“That person” is every person on the planet. There is always someone out there (or rather, a LOT of someones) that doesn’t know about your business.

So pick that hat up off  the coffee table, grab your bullhorn, and get outside.

14 thoughts on “6 Truths About Promoting Your Handmade Shop”