This cobbler is my favorite thing to make with peaches. The original recipe was the first peach cobbler I ever made, and I’ve tried lots of others since then, and this remains by and far my favorite.

The biscuit portion of other recipes always comes out too dough-y for my tastes. I like the way this one gets a crispness on the outside. It’s almost a combination between the traditional cobbler biscuit dough and a pie crust.

Plus, it looks really pretty with the swirled biscuits on top,  so it will  totally impress people at your next BBQ. 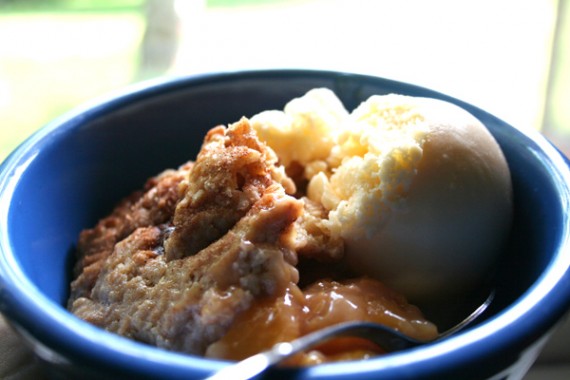 Here’s my twist on the original recipe, which mostly involves less sugar… I like to let the peaches be their sweet selves:

To Sprinkle on Top

Note:  You might noticed in the photos that I put my minced ginger in the dough filling, but I decided after this round of making it that I think it would be best to sprinkle it on top of the cobbler at the very end. I like the texture and taste of candied ginger better in it’s “drier” state, and when it’s in the biscuits, it tends to rehydrate and HOLY COW, it is strong stuff.

Note: The original recipe calls for 1/2 cup of sugar. I prefer to taste the fruit as I cut it up before I decide on the sugar. I had a mix of very sweet and mildly sweet peaches, so I used 1/4 of sugar. If they had all been very sweet, I probably wouldn’t have used any sugar, maybe a teaspoon or two. If they’d been very tart then I’d go up to 1/2 cup.

Tip: To easily peel peaches, bring a large pot of water to a boil. Have a large bowl of cold water on hand. Put the peaches in the boiling water for about 30 seconds to 1 minute, remove with a slotted spoon and place immediately into the cold water. The skins should slip right off.

1. Combine all of the biscuit dough ingredients except for the milk and vanilla in a food processor and pulse until a course meal forms. Alternately, you can blend with a pastry blender or with a fork… it’ll just take longer.
2. Put the dough “meal” in a large bowl and add the milk and vanilla. Mix until just combined.
3. Put the dough in the freezer while you prepare the peaches. A lot of recipes give a lot of “ifs” with this kind of thing. IF the dough gets sticky, IF you have trouble with it… put it in the freezer. Just trust me that this dough will absolutely need to go in the freezer. Or  the fridge, but the freezer is better. Do it or you’ll cry later.
4. Preheat the oven to 350 degrees. Peel the peaches and slice them directly into a 9 x 13 baking dish. Or cut them into a bowl if you like doing dishes.
5. Sprinkle the vanilla and lemon juice over top and stir the peaches.
6. Mix the flour and sugar, sprinkle on top, mix again.
Note: If you like very soft cooked peaches, put your peaches in the oven now, while you prepare the dough. I like mine more “al dente”, so I set them aside until step 12.
7. Get out your chilled dough and slap it on a piece of parchment paper dusted with flour. Sprinkle the top of the dough with flour.
8. Roll the dough into a rectangle approximately 9 x 15 inches. Put it back in the freezer.
9. Give it about 10 minutes before taking it back out. Brush it with the melted butter and sprinkle on the cinnamon, powdered ginger, and nutmeg.

10. Roll it up, like you’re making cinnamon rolls, from the long side. Get as tight a roll as you can. I was sloppy with mine and it gets a little messy when it’s loosely rolled.

11. If you can peel the paper off the roll easily, do so now. If it doesn’t come off easily, put the rolled up dough back in the freezer for 10 minutes.
12. Cut the roll into 1 inch slices, and lay them on top of the peach filling. There will probably be some gaps- that’s okay, the dough will expand a bit. Sprinkle the crystalized ginger on top.
13. Bake about 45 minutes, until the biscuits are golden brown.
14. Cool at least 10 minutes and then scarf it down with some ice cream. Serves 12-18.