If you’re a knitter, a maker, or a Firefly fan, chances are you’ve heard about Fox’s mass take-down of all unlicensed Jayne Cobb hats from various handmade selling venues. The argument I keep hearing over and over against this action is that a hat is a useful article and useful articles can’t be copyrighted. And that’s true.

But it’s not the end of the argument, because the names “Jayne Cobb” and “Firefly” and “Serenity” are all the intellectual property of Fox. If anyone selling a Jayne Cobb hat is calling it a Jayne Cobb hat, then they are absolutely infringing on a trademark. It doesn’t matter if you slap “inspired” on there, either. A name is a name, and if it’s trademarked, it’s trademarked.

The Catch 22 is that if you don’t use the name, you could (in theory) sell the hat free and clear and perfectly legally. But if you don’t use the name, how will Firefly fans find it?  And that is exactly why these companies trademark everything. If you’re in the market for a “Jayne Cobb hat”, they want their hat and only their hat to be what you find.

I say “in theory” because the other aspect of this equation is that the person reporting your hat to Etsy (or whatever selling venue you use) probably doesn’t totally understand the how’s and why’s themselves. I’ve dealt with some of these people and believe me that they are not copyright experts. They don’t generally even seem to be law experts.

It’s perfectly likely that this representative or Fox as a whole actually believes that you can not sell a hat that looks like the Jayne Cobb hat, regardless of what you call it. They’re wrong, but they’re also rich. They will send you and your selling venues cease and desists all day long. And sites like Etsy will remove your listing without question when asked to. It’s in their TOS.

So what are you to do if you’ve had your Jayne Cobb hat removed? Trademark violation or no, my personal rule of thumb is this: when Etsy removes an item, I leave it down. I have yet to find anyone that says their shop was shut down for the sole reason of copyright violations, but I personally would rather not chance it.

The moral of the story… Does Fox have a right to remove these hats? Yes, but perhaps not for the reason they think they do.

Kind of an off-topic aside:

I’m playing devil’s advocate here. Most of me thinks Fox is a big fat doucheballoon for throwing their weight around against a bunch of small business people and stay-at-home-knitter. But there is a small part of me that understands copyright holders are under an obligation to defend their copyrights. If they don’t, they risk losing the copyright.  Unfortunately, being able to defend a copyright tends to be a luxury of rich corporations. There are countless examples of small artists having designs stolen by shops like Urban Outfitters and Hot Topic, and unless you’ve got the funds to bring a lawsuit (or the company actually respects your cease and desist, HA!), you might find that your copyright is essentially worthless.

What is the best way to advertise on a budget?

Social networking is one of the best ways to market your shop, period. And it’s free!

Okay, so as the saying goes, “Time is money”. So it’s not free-free, but the time invested in getting new Facebook fans, Twitter followers, and Tumblr follows is worth it because you’re building a long-term relationship with potential customers. Traditional advertising flashes on the screen for 30 seconds, and then it’s gone.  That’s why the big companies have to play the stupid things so often.

So how do you best use a social network to market your shop? Check out my 6 Secrets to Twitter Success for a Handmade Business here. The same basic principles apply to any social network.

It’s also important to continue to build your following. If you have 600 Twitter fans, every time you share a link to your item, you’re only reaching those same 600 people. It’s just a simple fact that the more people you reach, the more potential for sales you’ll have.

Another great way to advertise on a budget is by doing giveaways. Again, it’s kinda free. You don’t pay money (or at least you shouldn’t have to… any blog wanting you to PAY to do a giveaway is shady, if you ask me), but you are offering up a free product, which is costing you the materials and the time to make it.

Be selective when choosing a site to do a giveaway with. One of the things you’ll get used to is people demanding free stuff. Every Tom, Dick, and Harry has an AWESOME blog, PERFECT FOR YOUR ITEMS, and they’d just LOVE to giveaway one of your AMAZING items to their followers! It’ll be a BIG HIT! Or maybe they don’t have a blog but they’re doing a CHARITY AUCTION for KIDS WITH LEPROSY and isn’t this a GREAT OPPORTUNITY to get the word out about your AMAZING items and do something GREAT FOR KIDS all at the same time!

My personal rule is that unless I’ve heard of the site doing the giveaway or actually know the person, I don’t give freebies. There are too many people out there willing to take advantage. It might not even be intentional, but it’s still costing you something. Never forget that. A freebie isn’t free for you.

Here’s a simple checklist you can use if you’re considering doing a giveaway with a blog/website you’re not familiar with:

People often get overwhelmed by the idea that they’ll never be done with marketing, but that’s the nature of running any business. We’re like sharks. We have to keep swimming, or we die. To make it easier, set small goals for yourself. If you make it a point to get 10 new Twitter followers a day, by the end of the year, you’ll have gained 3,650 followers! If you get 100 new Facebook likes on your fanpage per week, that’s 5200 new fans for your page in a year! That’s thousands more potential buyers for your shop. They won’t all buy, but again, that’s the nature of running any business.

Do you have a crafty business question or just general crafty question you’d like to ask?

My 8th grade graduation was the first formal event I ever went to. I was so excited to pick out a special dress for the big night… so imagine my horror when my arch nemesis showed up wearing the Exact. Same. Dress.
Luckily, I’m here to make sure you don’t make the same mistake I did. The dresses, gowns, skirts, corsets, and accessories here are so unique, you won’t run the risk of playing Twinsies on your big night.

A little gothic, a touch of punk, and some rockabilly sass, there’s something here for anyone wanting to take the alternative route to Prom, Homecoming, or any other formal event.

I will preface this post with the admission that I really am a dummy when it comes to photography. I don’t know many technical terms, I’ve never taken a class… I’ve learned it all through trial and error.

There are a few key components that you’ll need, but aside from the camera, they’re not too expensive (and in some cases, free), so don’t fret, my pet. 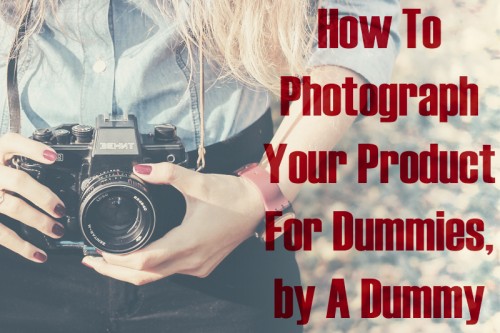 a camera – Your phone doesn’t count.

light – Natural daylight is the best!

a tripod – I guess if your phone can go on a tripod and takes decent pictures, I’ll let you slide…

a backdrop – I use a cheapo bed sheet. It’s not the prettiest or most professional, but it works.

a remote for your camera – If you’re the model and photographer, this will make your life a million times easier. I got mine from Amazon.

additional lighting – The more “daylight-like”, the better. See the bottom of this post for a link to a great tutorial for lighting on the cheap.