Take a look at the hem of most t-shirts and you’ll see what’s called a coverstitch or coverhem. Most people assume that this is done by a serger. Unfortunately, that’s not always the case. 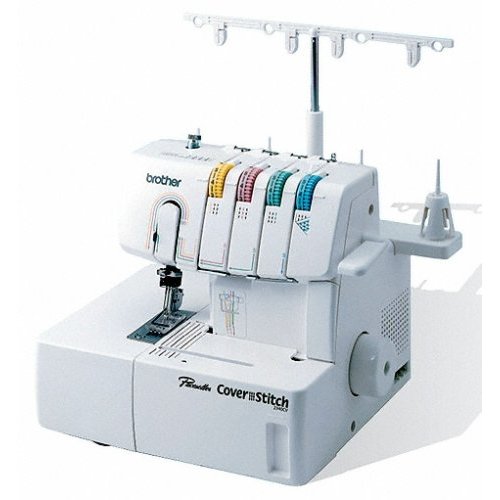 Some higher end sergers will indeed convert to a coverstitch machine. Or you can buy a stand alone coverstitch machine. I have the Brother 2340cv shown to the left, and it’s pretty kickass. I kept putting it off, thinking it was silly to have  machine that does one little thing, but it really is useful if you sew a lot.

Unless your bursting at the seams with cash, though, I don’t think I would say such an investment was necessary.  There happens to be a $5 Cheater McPeter way of doing it, which I employed for several years when I was without a coverstitch machine. Behold, the Twin Needle!! 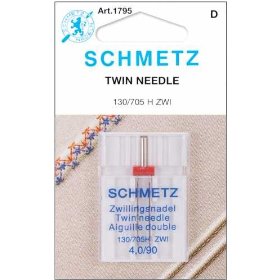 It looks like two needles on one needle shaft, and that’s exactly what it is. You will insert the needle in your standard zig-zag sewing machine* like any other needle. You’ll also need to rig up a second spool of thread.

Once you’ve threaded both needles, you can sew as usual (though I like to take it slow). You might need some tension adjustment, as well. When you sew a regular straight stitch, the top of the stitching will be two parallel rows of straight stitching. However, the bottom (bobbin) thread will be a zig zag. It’s not quite as stretchy as a true coverstitch, but it looks almost identical.

I’d also recommend buying an extra set or two. At least for me, twin needles were more prone to breaking.

(Of course, you can always fold your hems up and straight stitch them, if you’ve got a sewing machine that takes kindly to knits. Or you can use a zig zag. But if you just can’t stand not having that double stitched goodness, try a twin needle.)

*Some older machines will not be compatible with the twin needle. Also, I’ve heard through the grapevine that some machines require that you set your machine to a zig-zag stitch when you’re using a twin needle. Both of my machines used a straight stitch, though.