Or more accurately, where have I been?

It’s been kind of a doozy of a year, honestly.

First, I had surgery earlier this year to remove a cantaloupe-sized cyst from my ovary. It was actually — shockingly — not as traumatic as it sounds.

I got to come home the same day of the surgery, and I was back on my feet within the week. But it was still a stressful time, and I had about a million effing doctor’s appointments and lab tests leading up to the surgery, and it was a giant time-suck. I was also diagnosed with endometriosis during the surgery, so there’s been some adjusting (mostly emotional) to the idea of having a chronic illness. (Mostly it goes something like this: AHA! I knew there was something wrong with me! And then: But wait… I just have this disease now… like… forever??? THIS BLOWS BIG TIME.)

Next, I had full video and photos for a new tutorial I was really excited about that just vanished without a trace. POOF! Gone. I don’t know if I accidentally deleted the files or maybe my camera ate them, but it really bummed me out. It was literally hours of work down the drain. Then hours searching for the files. And I hate to admit that it kind of sapped my enthusiasm for making new tutorials for a while. Because I am a big baby.

Lastly, there was a career change. After running SmarmyClothes as my full-time gig since 2005, I’ve been gradually transitioning the sewing into a side-gig over the past few years to make time for my new passion: writing. My boyfriend and I started publishing in 2013, and things kind of took off from there. We’ve now written and published 20 novels and novellas since then.

A few weeks ago, after wrestling with the decision for quite some time, I came to the conclusion that I no longer had time to sew for others. If you’ve visited my shop in the last month or so, you may have noticed a change in inventory. Aside from my sewing patterns (which I will continue to sell and hope to add more over time), most of what’s for sale are one-offs and leftover sample pieces. It’s a great time to get a screaming deal on a Smarment, BTW. Everything is 30% off. 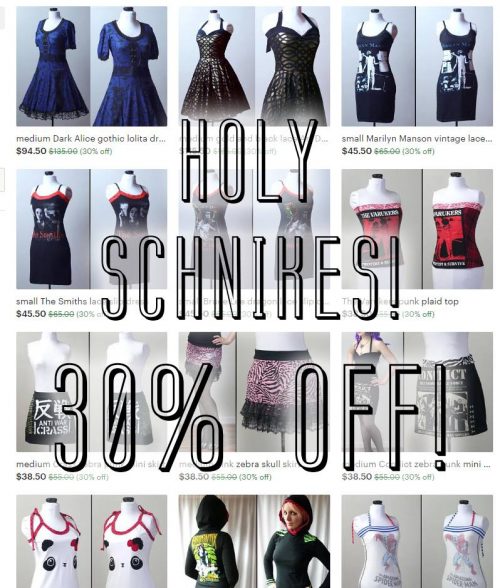 There’s no way, when I sold that first handmade skirt in Ebay back in 2003, that I could have imagined it would turn into a 15-year-long career. A huge pizza-flavored thank you to all of you that supported me over the years, whether it was by buying my stuff or just saying something nice. You rock.

So what does that mean for WhatTheCraft? Well, hopefully now that I’ve taken the sewing-for-hire off my plate, I will have more time to devote to sharing my personal sewing projects and putting together new tutorials and patterns! I’ve already got several new tuts in various stages of completion, so I should have something new for you soon.

Again, thank you guys so much for making this what it’s become.